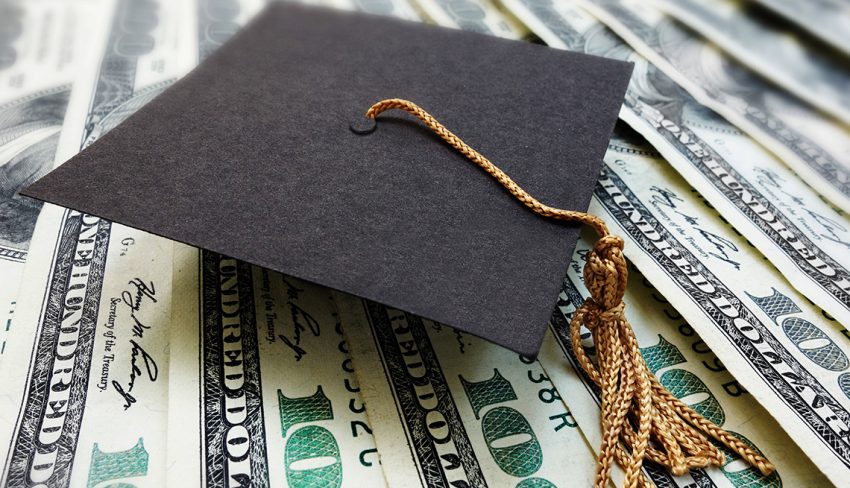 It’s like taxes. No matter what you do, it’s there…like a giant leech sucking your money – inexorably – out of your bank account.

Any debt – whether for a flat screen, a mortgage, or your education – for the most part just means you’re buying something you can’t afford.

But it’s kind of like being in prison and getting a great job at the ice cream station vs cleaning toilets. Either way, you’re still in prison.

(Full disclosure: I have never been in prison and don’t know if there are in fact ice cream stations anywhere, but I think such a thing would be nice. If you’re in prison reading this, no offense. I don’t mean to offend anyone, especially people in prison. Anyhoo…)

Debt pulls forward your future consumption you can’t afford today into the present.

For me, I couldn’t afford to get my Masters degree. So I took out debt.

Anyone whose contemplated such a move has of course gone online to see what the “right” move is.

What I came to when making the decision is like most things, however, there are no “right” or “wrong” moves. To me the choice is kind of like playing poker. There are certain “expected values” and right plays that mathematically give you the largest chance of winning given your particular hand. And you also have an emotional intuition which confuses the decision as well.

Not sure if any of that makes sense. But anyway, here are a few considerations worth keeping in mind if you’re wondering what’s the right move for you:

Certainly if you have a high interest rate, you should pay it off early. After all, there is risk involved in investing, and your risk free rate of return (which you should calculate when evaluating stocks to identify their “intrinsic value”) would mean that a cheap stock to someone else might in fact be expensive, since your risk free rate of return is based on a 6-7% student loan, while someone who is debt free is basing their risk free rate of return on a 10 year note, which should be significantly lower
You’ve read a Dave Ramsey book and feel that debt is evil and having it is like a noose around your neck. Do yourself a favor and pay it off to feel better psychologically.
As a corollary to the above, ask yourself the question, “Would I take out a loan of (insert your student loan interest rate), to invest in the market?” If the answer is no, then pay it off.
Basically pay it off if you’re conservative in your financial outlook. In general, you won’t go wrong by paying off debt. You might miss out on higher returns, but you’re reducing your risk.

Your interest rate is lower than the expected rate of return of other investments. From a purely mathematical perspective, this should be your “true north” when making the decision
You have no psychological issue and the payments are not a burden to you
You expect that there will be inflation  – in this case you could argue that you’ll be paying off the student loan with cheaper dollars in the future
You think a Bernie Sanders style socialist will get into the white house and declare that all student loans in the nation will be paid for by the spare change in Mark Zuckerberg’s piggy bank
You don’t yet have an emergency fund to cover any unexpected twists in your life

As for me, I had a relatively low interest rate of 2.875% which from a math perspective would suggest that I should keep it. But I also had earned a good deal of cash this year, so paying it off wasn’t a major hit for me. Also, I felt like I could have done a graduated plan and increased my payments so as to have the best of both worlds, but after lots of research, I just woke up one day and just said, “I want to be debt free” and so I made the payment.

Do I feel any different now? Actually I thought I would, like having some kind of big psychological weight off my shoulders, but truth is I really don’t. I feel the exact same as I did yesterday.

Maybe I should have kept the cash.

Obviously I’m still going back and forth on the logic of my choice. But at least I can tell others I’m debt free now, so maybe that counts for something.

So there you go.

Did I end up doing the right thing by paying off my student loan? Do you have student loans? What’s your strategy?

Thanks peoples for stopping by.

The Dividend-O-Matic 5000
Email updates. Win at the Internet.

I will never give away, trade or sell your email address. You can unsubscribe at any time.